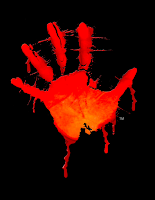 Spawned in 2006, 5 Minute Horror has created short horror videos for on-line viewers. By specializing in the horror genre, and producing the content “in house,” we guarantee high quality, low cost, consistent product. In addition to content, we offer access to creators and production, an industry first.

5 Minute Horror” is dedicated to creating the paradigm of 21st century entertainment, combining creativity, professionalism, and audience responsiveness for a tight, combustible video product, exclusively for the interactive age. 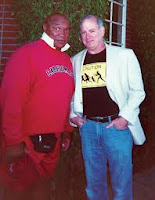 5 Minute Horror began in 2006, the brainchild of B.K. Willerford and Craig Sabin. Combining their film industry expertise, they rounded up a talented crew of video artists, technicians and actors, and shot three films, for a total budget of $10,000. One of the films (“Supersex”) went on to win the fearzone.net award for best picture of the year.
The website officially launched in December 2008. Since that time, 5 Minute Horror has signed up with C-Stores Networks, a marketing company and entertainment provider, giving 5 Minute Horror a national platform. Our first film festival, the “Bloody Shorts Film Festival” featured entries from as far away as Germany. 5 Minute Horror was tapped by the Horror Writers Association to provide future live webcasts of their annual Bram Stoker Awards. 5 Minute Horror will also be on the set of the upcoming Greg Lamberson picture “Slime City Massacre.”

5 Fingers, Four Phases
As exciting as the last few months have been, the future looks even more exciting. What follows is the blueprint for that future, laid out in four phases. We’re currently in Phase One, and are seeking funding to take us to Phase Two.

Phase One;
5 Minute Horror’s start-up operations included assembling a team of high quality filmmakers, creating a system of film production that lowered costs through economies of scale and efficiency, creating the website, shooting original films, establishing contests, and introducing the 5 Minute Horror brand to new audiences. All the above goals have been accomplished, and the groundwork for future expansion has been laid.

Phase Two;
The second stage of 5 Minute Horror’s growth is to build an audience of 150,000 subscribers by December 2010, that consistently return for new product, engage with the website online, and purchase merchandise for the “Gore Store.” We will make 22-24 short films and build our efficiency systems, as well as continue our contests.

Phase Three;
Having established an audience, 5 Minute Horror will grow that audience by 75%, by creating events 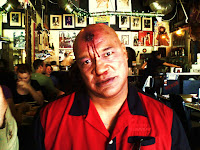 such as film shoots and contests, which build greater excitement and awareness amongst them. With 250,000 steady hits a month by October 2011, we will aggressively court and secure 2 major sponsors, as well as 5 smaller advertisers for product placement opportunities and advertising. Finally, we will produce a long form feature film and seek entertainment, seeking film studio sponsorship and distribution.

Phase Four;
5 Minute Horror will create an ancillary websites to compliment the 5 Minute Horror brand specifically for fan films, as well as add a subscriber level of membership to the main website for $5 a year. We will grow our audience to 500,000, and shoot 40 short films and two features.

The secret to the success of any website boils down to the ability to capture eyes. With enough viewers, merchandise can be sold and advertisers can be attracted.
5 Minute Horror will gather the attention of viewers with five strategies;
1.) Content
2.) Strategic Partnerships
3.) Contests
4.) Blogs/Social Networking
5.) Advertising
Below are descriptions of these strategies, as well as a brief look at the costs of enacting them. 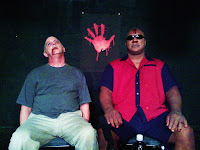 5 Minute Horror prides itself on content. Our goal is to become the Twilight Zone for the 21st century, turning to the entire spectrum of horror for inspiration. Humorous, suspenseful, gory, thought provoking, our content will and does run the gamut. In addition to “stand-alone” pieces, we will feature at least one serial adventure, with an ongoing plot and returning characters. This will bring viewers back to see what happens next.
Using our contacts and production experience, 5 Minute Horror is able to produce these short videos for an average $7,000 per video. (see sample budget, pg. 8 ) Budgets will further decline by applying economies of scale, i.e. writing different videos that share the same props, locations, etc. $150,000, will be spent on video production, and incidental expenses, such as payment of interest/dividends.

Strategic Partnerships
5 Minute Horror is currently partnered with such organizations as the Horror Writers Association (HWA), Fearzone.net, Quickfest.com, C-Stores Networks, Apprehensive Films, and multiple horror blogs, as well as YouTube stars “Ryan and Dorkman.” We will leverage these relationships to build and grow our audience, as well as create new partnerships.

Contests
Film and script contests are an excellent way to engage new talent, as well as spread positive word of mouth among our desired demographic. Phase One will incorporate such contests in the 5 Minute Horror website, such as the “Bloody Shorts Film Festival” currently airing at www.5minutehorror.com. The costs of the festivals will be covered by the entry fees of the applicants.

Blogs/Social Networking
5 Minute Horror has a blog, written by Mr. Sabin and Mr. Willerford.
Social Networking, the practice of establishing a presence on sites such as Facebook , MySpace or Twitter and connecting with an ever-broadening base of “friends” and other interested parties, requires more hands-on attention. 5 Minute Horror will contract with a social networker, who will be tasked with creating and interacting with a large base, and adding to it everyday. This person will be paid per friend request, with a maximum of 150 new requests per day, setting our budget for social networking at $30,000. This money will come out of the $300,000 Phase Two budget.

The combined result of these strategies will increase awareness of the website, and should enable 5 Minute Horror to reach its projected viewership of 150,000. Those viewers will find a great number of high quality short horror films and a constant infusion of new content to keep them coming back.